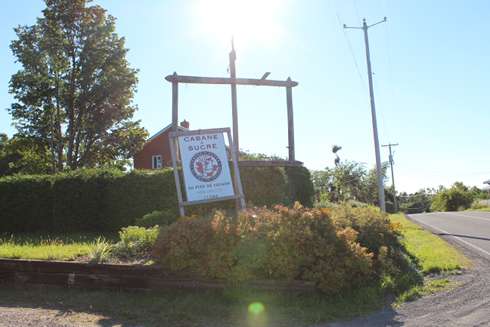 Guess what time it is? That’s right, it’s the Pied de Cochon Apple cabane à sucre season. That magical time when you get to eat the apple and foie gras inspirations that Chef Martin Picard and the Pied de Cochon team have prepared.

But first, here’s a little background on this magical event for all those who are not familiar with it. The Pied de Cochon restaurant has a cabane à sucre up at 11382 Rang de la Fresnière in St-Benoît de Mirabel (or if your GPS gives you attitude like mine, just Mirabel). Twice a year they have 2 seasons of what can best be described as food orgies. The fall seasons focuses on apples as the inspirational menu items and the winter one focuses on maple syrup. This current season is from the 23rd of August until the 27th of October and reservations for this had to be done well in advanced. In this case it was April 1st so you really need to keep an eye peeled for the invites. 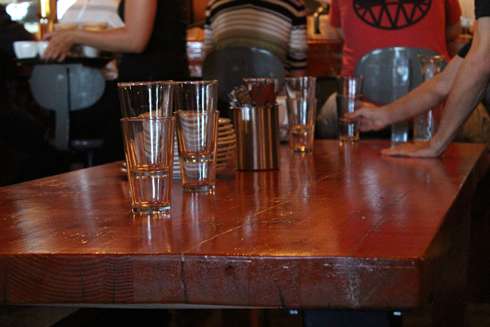 Thanks to a friend, I was able to get an invite to the 1st weekend (my official reservation is later on). The menu is a fixed one, and although the tables seat 10, if you are not 10 people your group gets its meal scaled to match the amount of people you are, so everyone gets the same proportional amount and not one gets shorted. 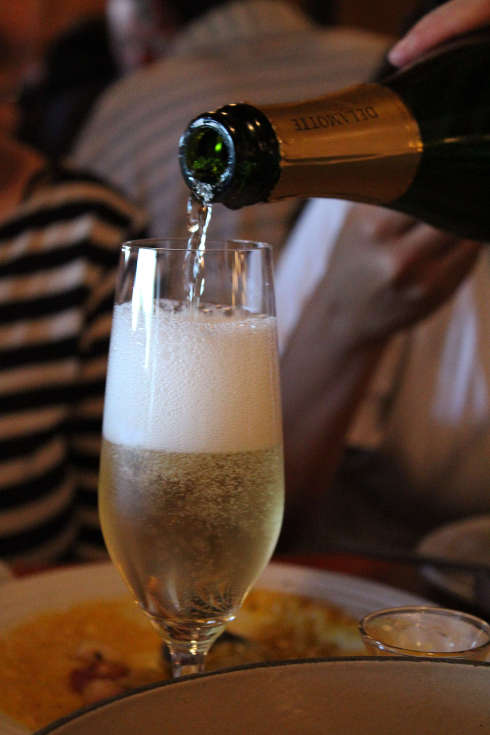 When we got settled in, the waiters came around and asked us for drinks. There were a few apple inspired drinks like a daiquiri in a little bottle, an apple core vodka martini, champagne, a spin on an Irish car bomb, an apple bourbon shooter and a rhum based slush drink. I had the daiquiri ($10.50) and the martini. The Martini was heavy on the vodka and although I’m a gin fan, I enjoyed the fact that they have an apple core inside the drink, which makes for a cool look. The daiquiri was sweet and fun and the little bottle with the straw made me feel like a kid. It had tequila and strawberry in it; not an apple drink but, tasty nonetheless. I preferred this one to the martini and I’m a martini fan so you can imagine how good the daiquiri was. 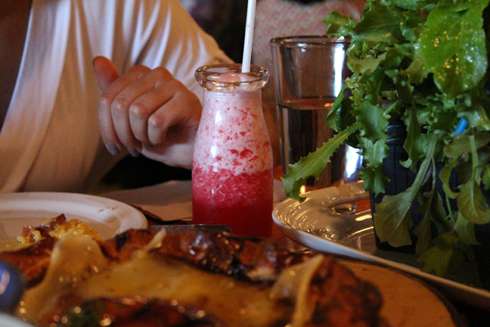 The service is broken into three sections with a little time in between so you can try to digest the onslaught of food. There is a fixed rate of $50 not including tax, tip, or drinks. 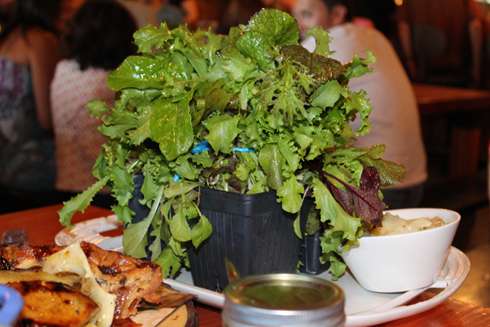 The first service was comprised of an apple pie with duck foie gras, cheddar marinated in apple cider, caramelized onions and a double cream to put on top as an option. There was also a vegetable stew with sturgeon, duck, pork, and chicken. To lighten these dishes they included a salad that was literally the plant in front of us and already marinated that came along with scissors so you can trim it and make your own. I felt this was incredibly creative, granted a bit of a pain to do, but a fun way to make the meal more interactive. 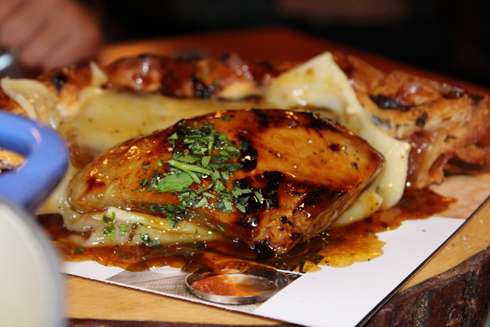 The apple pie and foie gras worked incredibly well together. I never really though you could combine the sweetness of a whole apple pie with foie gras but it works, and it was incredible. Adding a little of the double cream also changes the taste a little and is a welcomed addition. 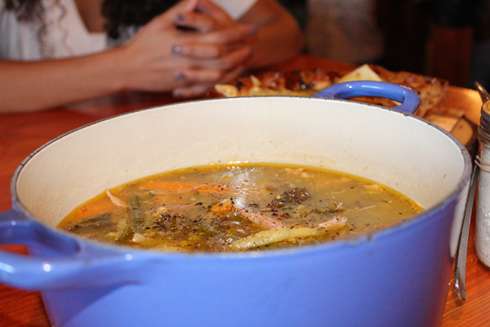 The stew was had just enough vegetables in it to make you not feel bad about all the meat that was inside. It was, oddly enough, lighter than expected and I even went for seconds. I personally feel that the soups of the Cabane are one of the most understated dishes and tend to get lost with all the meat in other dishes and I look forward to them every year. 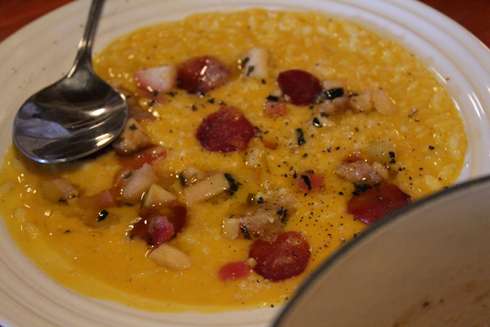 Our second service started off light with a risotto that had white wine, onions and sausage. If you are a larger group they prepare it in a parmesan cheese wheel which is quite something worth seeing. The risotto was good but I did not find it was as rich as I was expecting. I should note that when I say it started off light it is because mere moments after the risotto, you get this giant wooden slab topped with meat – lots of meat. 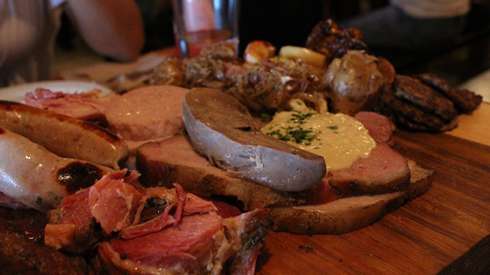 The mega meat platter had everything from pigs foot, garlic sausage, smoked meat, pork loin, pork shoulder, marinated tongue, mortadella and pepperettes. The non-meat items were an apple coleslaw and potatoes. All the meat was tasty, and incredibly filling. We had to ask for some doggy bag containers to bring back. Everything on this plate is perfect! We stuffed ourselves here and the only regret we had was that we didn’t have a second stomach. 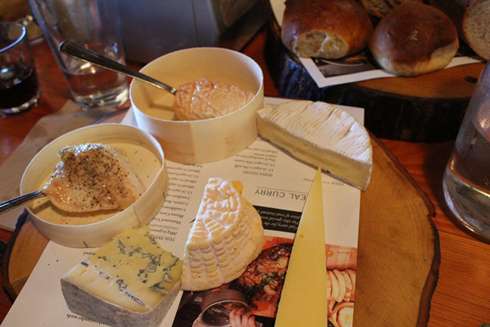 This service also had a cheese section with some Quebec cheeses made especially for the cabane as well as some French cheeses. We had a cheese made at St Joseph du Lac especially for this occasion, which was made to sit 2 months in apple juice for a unique flavour, There was a sucre Laurier cheese, a Charlevoix, a Hercule and a Camembert. I should note that my notes on this section were a little unclear and this may be because the meat sweats were kicking in. There were also 3 breads to accompany the cheese which included baguette bread, an onion bread and a nut bread. Sadly, this dish was barely touched and there were some cheese lovers at the table. It’s just that with the meat platter, you are full very quickly and the cheese gets overshadowed. 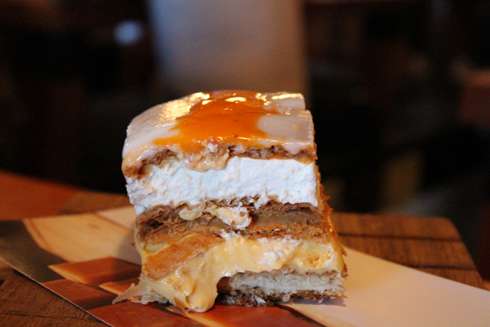 Lastly, was the dessert. We got a squash layered cake, apple stuffed doughnuts and St-Ambroise beer ice cream. By this point we only picked at our desserts. The apple stuffed doughnuts were jammed with apple goodness although, I could have done without the powdered sugar exterior which I find is a pain. The ice cream was perfectly presented and had various flavours throughout it. The layered cake looks heavy, although it wasn’t which was the most surprising part of all. 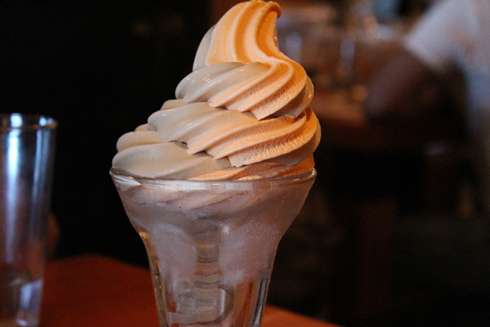 For $50 I was impressed. Now, when I factor in drinks, tips, coffee my bill definitely climbs but if you have the food itself, $50 is unbelievable. I thoroughly enjoyed all the dishes. I just wish we could get more Tupperware for take away which some people were complaining that they had to fight to squeeze out more from the staff. We didn’t really have a problem and if you compare this to any other restaurant or dinning experience you cannot get the quality and quantity of food for what you pay. 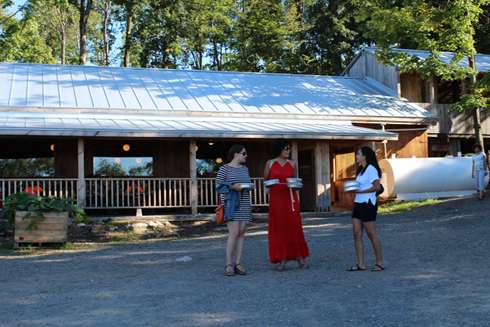