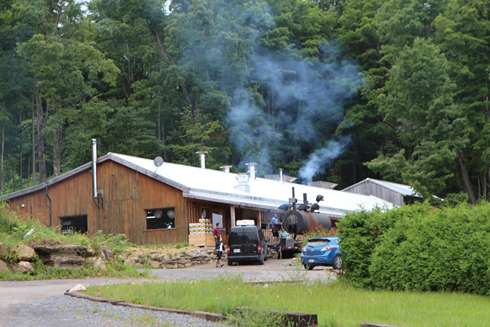 It’s Pied de Cochon time again- cabane a sucre apple season: the-over-the-top seasonal gastronomic extravaganza from the brain of Martin Picard and his team; and, this year does not disappoint. This time we have a twist on the apple season. Although apples are featured in the menu, we have an emphasis on vegetables as well and the bounty of the harvest that the summer has brought us. You can see it from the items in the food to the bright red colours the staff is wearing – you see that summer is upon us. Now, don’t be afraid that just because we said vegetables, there is still loads of meat and foie gras, I mean, this is Pied de Cochon, after all, so you are guaranteed to have a copious meal filled with meat and foie gras. With all things involving the creative direction of chefs and in order for things to remain fresh and up to date they will keep changing the menu. What we saw today will be what others will see this season but ingredients and items might change as we get feedback and other seasonal items become available. Remember this spans from August 15 to November 1st so we cover summer and fall. 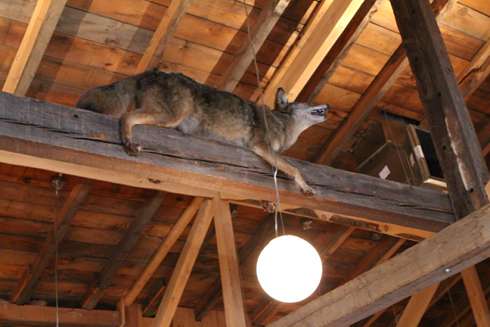 This year’s cabane crew was a mix of familiar faces as well as new ones. It’s always fun to see repeat visitors and the excitement they get when sitting down for this one-of-a-kind meal. The only thing better than this is when we have people at the table experiencing Pied de cochon cabane for the first time. That look of wonder the first time you experience the various dishes is always the most precious and wonderful thing to see. 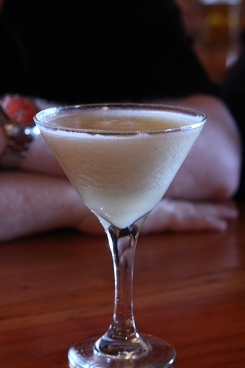 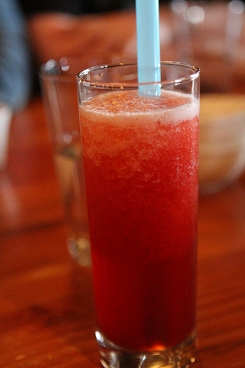 So, for $55 you get two round of dishes and a round of dessert. There is a variety of drinks priced between $8-$12 for cocktails such as roasted pear daiquiri, raspberry slush, Gin watermelon and $28 for a pitcher of Sangria. Coffee is extra and kids eat at a discounted rate with a smaller portion. 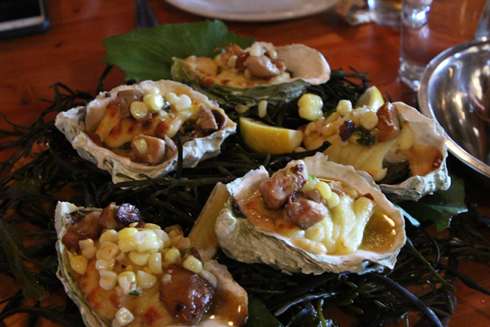 The first course came out swinging and took no prisoners. There were Double D Oysters with potatoes in them as well as corn and foie gras. These were not raw oysters but almost done as an oyster Rockefeller style. They were enormous and made quite an impression. 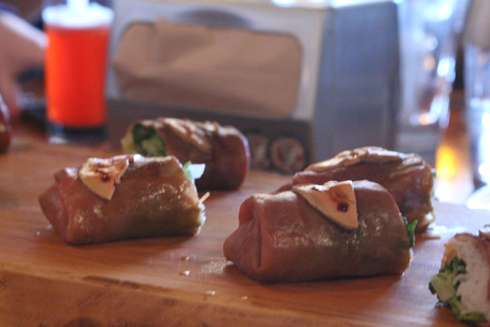 There was also a Maki roll-meets-spring roll creation topped with foie gras slice on top. This was served cold and was reminiscent of the Asian inspired maki rolls we used to see a few years back so it was nice to see this dish pay homage to that. Of all the dishes this was the least impressive, although considering the amount of dishes we went through that is not a bad thing considering that the bar is set so high. 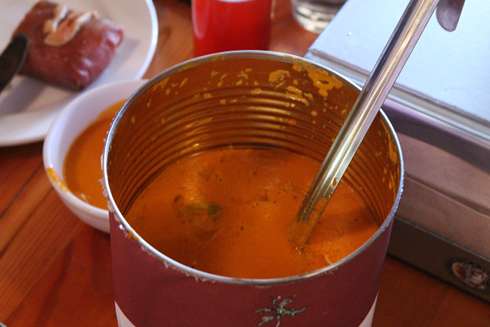 There was a cream of tomato soup that had the whole table talking and not just because that was it was served from a large can giving it a rustic presentation but, also the fact that no one wanted to miss out on it and all the bowls were cleaned up. You could tell people were in love with it. 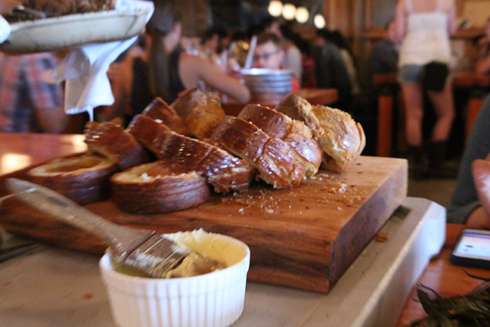 The brioche with sausage with migneron cheese and beef was an impressive dish presented and prepared on a side cart. The sausage was large and the brioche was the perfect accompaniment to it. Oddly enough, it was something we expected to be incredibly heavy but it wasn’t and, in terms of taste, it was one of the standout dishes. 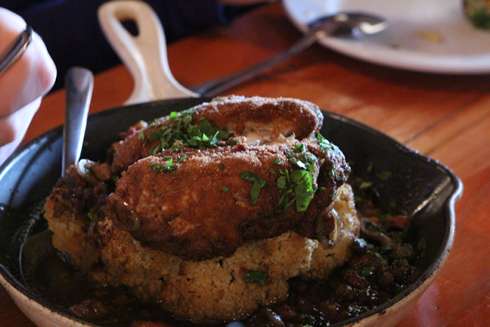 They also had whole Cauliflower with cream of cauliflower, as well, with veal brain. The brain was in a batter which made it tasty but the consistency of brain is tad boring and once you got past the batter it was just brain. I have eaten brain on many occasions and the taste is not pronounced, it’s actually quite subtle. The cauliflower, though, was excellent and spiced in an way that made this vegetable that children dread become a stand out. 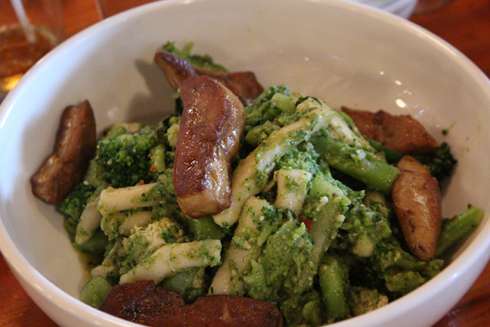 There was a broccoli, house tofu and foie gras dish that best resembled a salad and much like that cauliflower dish Pied de Cochon made every parents dream come true and took a vegetable that most people are not fond of and made it sexy and delicious. Even though there were large chunks of foie gras in it, the broccoli still stood out on its own. 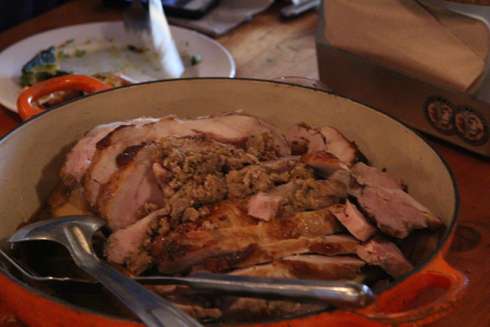 Then, after all that, the meat dishes came out like the pork roll/roast with mustard and filled with sweet breads and roasted apples. This is the standard meat-centric dish that is the insurance dish and by insurance we mean that we guarantee your appetite is covered and you are on your way to food coma. 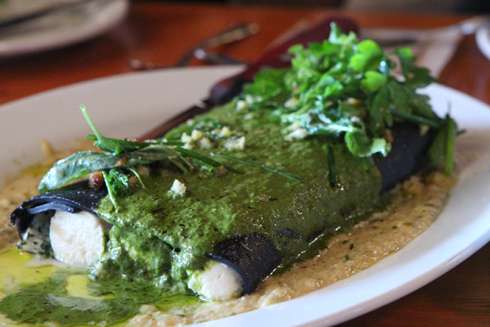 The squid Ink cannelloni was stuffed with cheese and with swordfish mousse. The cheese taste was very pronounced and was nice to see served up with all these meat dishes. 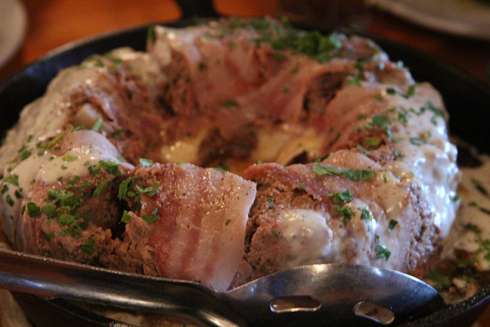 As if the previous dish wasn’t enough, the Pied de Cochon team also had a pork pate, pork liver, bacon, white ham, brie a wine mushroom and béchamel sauce. This dish was a little more difficult to serve as it did break up sometimes but it helped fill you up and get you in the meat sweat zone. 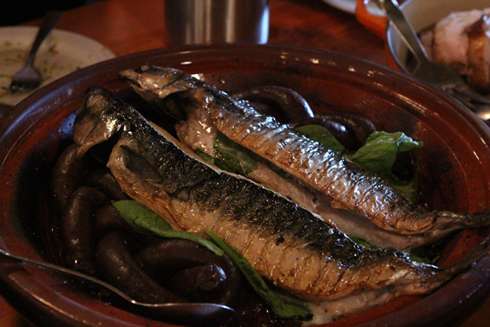 One of my favourite dishes is always a fish one and this year was no exception. The de-boned mackerel was served with merguez sausage links and Moroccan spice cooked in a tajine. The fish was incredible and, although often lost with all the meatier dishes, this one shinned brightly as each bite was perfection. 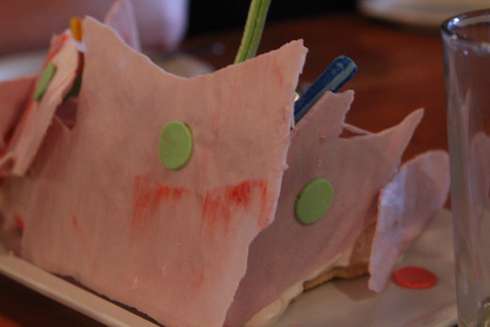 The dessert round came after a small breather. By this point you have to dig deep and find that 2nd stomach you have been saving. You should make the effort because dessert at Pied de Cochon is always worth it. We had a gingerbread house with vanilla ice cream with meringue and strawberry sherbet. This is a nice way to cool down after getting into the meat sweat zone. 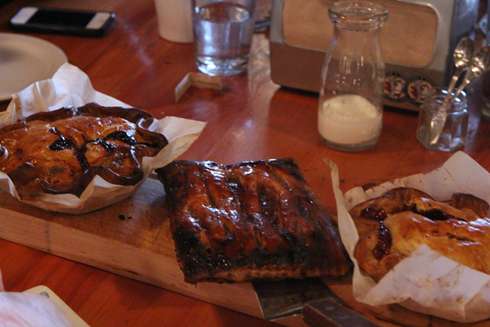 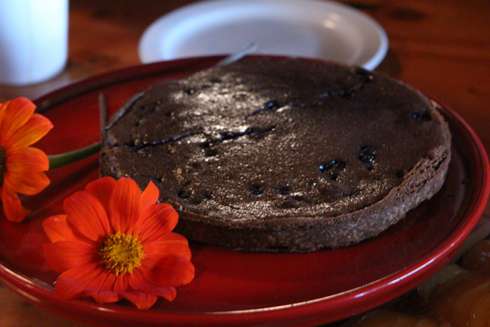 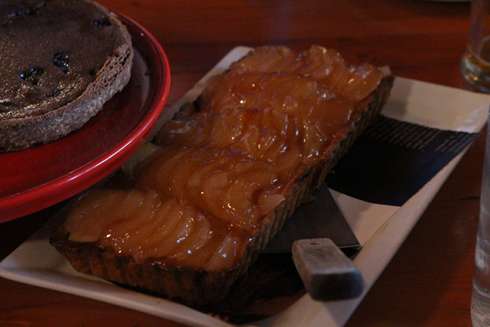 So our trip to the Pied de Cochon Cabane a Sucre for apple season was impressive, to say the least. The mackerel tajine, oysters, broccoli salad, and blueberry chocolate cake were some of the top dishes. That doesn’t mean the rest are by no means spectacular. It’s just those are the ones I keep dreaming about. I would have broken up the first round in two because it was a shock and because when we say they came out swinging they really did and we got pounded with great food. It would have allowed better pacing but I can see how that affects timing and logistics on their end. I like how they went with vegetables and not only apples,but we still got apples and the featuring of cauliflower and broccoli were well worth it.  I hope those recipes get shared so parents can make those two vegetables enjoyable for their kids.

Keep in mind the menu will change a little as time goes on and different ingredients become available.  Do expect to find this similar theme and remember all of this is $55 before tax and tip. Just imagine getting this at a restaurant back in Montreal, both in terms of quality, taste, quantity and creativity – you will never find anything close to this.