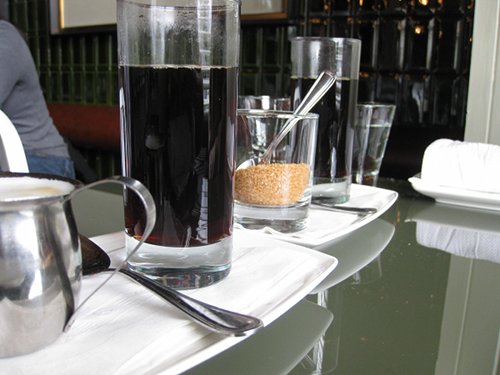 The 411 – The Old Port has, over the years, brought the city a resurgence in good food. Historically known as a tourist trap, it has shaped its own identity among locals who have moved into the area drawn by new restaurants. When one looks back a couple years ago, one would not see that many fine dining spots but now things have changed for the better. There are finally new, hip and unique spots opening up and they offer food you will enjoy. So, when my friend told me that a new place opened up nearby, I was excited.

When you walk up to Communion, the building exterior kind of mixes with the architecture and by that, I mean, it’s nice but nothing really sticks out. However, when you walk in that’s where you see the amazing décor. They did a great job inside. They seem to marry new accents while still keeping an old charm. There is a large bar in front with seating to the left and right. The right hand wall has these little black high gloss tiles and cool paintings. The capacity in the front room is limited although, there is a very large back room where you can have private events. They suggest reserving here and it has generally

been full when I have passed by so maybe you should call ahead to be safe. But, I bet you that if its only 2 people you will find a table. I should note that the washroom is gender neutral and to be honest the concept does not work here. The stalls inside the washroom are not closed off enough to hide sounds, and feet (because you know I will be taking notes and judging you, that’s right I said it…). I rarely offer suggestions on layout ideas but the washroom is not well done. I would rather have 2 fully private washrooms and have them be wheelchair accessible. That and the entrance needs a proper vestibule. When you open the door you get cold. Because the cold winter air whips in the room, it is actually rather distracting and un-pleasant.

The menu is broken down into two sections. One section is for the 2 person items, which is an option from 3 choices that are all encompassing; they have loads of dishes and options and are rather plentiful so you definitely need to share them with another. The second option is to order from the individual item menu. I should note that there is a special rule that you need to be aware of when you come.

If you are 4 people or more you must order from the 2-person menu ($16-$19 per person), you cannot order an individual menu item unless you add it to the 2 person item. This is part of the restaurant’s concept and I was told it is like that because the kitchen is too small to do a service to all the people at the table if they don’t choose the larger menu. I know some people will have issues with this since their choices decrease when they are 4 or more people, so keep this in mind if this bothers you.

To give you an idea of the options, here is the menu breakdown:

Having been here twice I can offer a review of one of the two person menus and the single items. To be clear about the 2 person menus, you must be 2 people to order it or be incredibly hungry and willing to pay for 2 or you are forced into choosing it if you are 4 people or more. There are 3 options ranging from $16-$19 per person and all 3 items basically cover all the single order items and it really fills up the table. All 3 options come served with fresh squeezed orange juice, fair trade bio coffee, a bread selection with homemade jam and a fruit salad. The 3 items are as follows:

The Classique ($18) which is pancakes, baked beans with pork, maple braised ham, scrambled eggs with chives and potatoes. The Santé ($16) which is almond milk oatmeal, nut bread pudding, homemade granola, yogourt, and buckwheat crêpes. Lastly is the Cosmopolitain ($19) which is an egg in window, gravlax salmon, cheese, green salad, blood sausage and grilled tomato.

From the sharing menu we chose the Santé ($16) which was an incredibly generous health inspired dish. Items like almond milk, nut bread, granola, and pancakes are rather carbohydrate intensive. The pancakes are buckwheat which is gluten friendly and a nice touch. The fruit bowl is large and tasty and the almond milk oatmeal is the hearty tasty option. The almond milk is a nice alternative for those who are lactose intolerant. I should also note that oatmeal can is not gluten free although some celiacs can handle it if made with certain oats. I did not get a confirmation from them that this item is, so if you are gluten intolerant please ask. The bread pudding had to be one of the best items I tried.

It had an amazing understated sweetness and every bite was greater than the previous. I should note that we had a side order of bacon ($4.50) which was actually wild boar bacon, a bacon variety I have never tried before and was quite excited to eat. I was so happy to have tried it since the taste was incredible and the thickness of the cut was refreshing considering you often get these tiny little strips at other places. In all honesty this serving was so large that we could not finish it all.

On the second occasion, I was able to order from the individual menu. I ordered the eggs quasi Benedict ($16) which is a poached egg on fried bread, salmon gravlax, sauteed mushrooms and a side of fruit salad or green salad topped with holondaise sauce. We opted for the fruit salad. The bread used was different from the usual English muffin and the mushrooms were quite pronounced and delicious in this dish. The fruit cup on the side was a mediocre size and coffee was extra at $2.50. I would have liked a little extra on this dish maybe a side of potatoes would have filled up some empty space on the dish. Although, I don’t want this to take away the tastyness of the dish itself which was excellently prepared and each bite was an absolute pleasure.

Lastly came the Montechristo sandwich ($14) which can be described as a homemade brioche, smoked ham, thyme infused béchamel, cheddar & gruyère cheese, pan seared with fruit salad or green salad. My friend doesn’t eat pork so we requested to drop it. In hindsight, we should not have since it changed the taste. We ended up with a kind of deep fried grilled cheese. The thyme infused béchamel and two cheese were very tasty, but if only they would have been able to substitute the ham with something else. The dish seemed incomplete without the ham, and a backup plan for subbing the meat would be nice to see for next time. I did like the way that the bread is kind of friend/pan seared which makes it very tasty and ,although a little oily, you learn that a fork and knife are better to use. Coffee was also not included in this but you do get free refills.

Both times we went the service has been good. The staff is polite prompt and friendly. I do have an issue with the policy of being forced to order the sharing menu If you are 4 or more, but I will elaborate this in the wrap up.

Most dishes don’t really have meat. The healthy sharing item also has gluten free items which is refreshing to see. I was disappointed that they only dropped the ham in the Montechristo and did not sub it with something else. I am aware that a Montechristo has ham in it but other recipes can call for turkey and or chicken, so substitutions should be available.

I am torn on Communion. On one end, I absolutely loved the food on the sharing menu; our health dish was tasty, a joy to look at and an even greater joy to eat. The quasi eggs Benedict was great and the mushrooms stood out with the salmon to provide a unique spin on a classic. On the down side, the prices can be high on the single items, I mean, our Montechristo was $14 and if you want coffee you need to add $2.50. The price tag on the quasi Benedict with coffee is $18.50. The sharing menu items are not cheap either ranging anywhere between $16-$19 but WOW! you do get a great offering. It is tasty and plentiful so if you are hungry and can convince someone else to share it with you then this item is a deal especially with an extra bread and coffee included.

Given a choice between the quasi Benedict with coffee and a sharing menu item, it’s a no brainer – go for the sharing item since you get more food and a better value as well as more choice. However, I still feel that being forced to order from the sharing menu seems wrong and although I know I will get heat for this, I hate having choices removed, even if they have a small kitchen and it’s the concept. Why should a group of 3 have more choice than a group of 4. If you are more people, you bring in business. Often when I go to places with large groups we get special custom stuff, they seem to do the opposite here. If they would drop this they could be one of my top 10 spots because the food was so good. As always I leave the choice up to you. Try it out and let us know what you think.

View Communion in a larger map