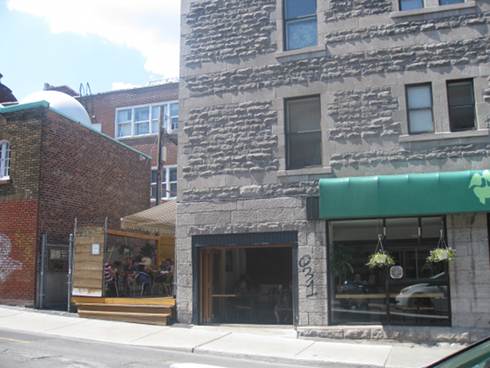 The 411It’s been a while since we have done a vegan brunch review – the main reason being that there aren’t too many vegan brunches available in Montreal. In essence, brunch menus can be vegetarian friendly but to go one step further and make it vegan friendly is more difficult. Vegans need to avoid dairy and eggs, not to mention all meat. You can drop meat from a dish but eggs and dairy become much more difficult to substitute especially for brunch, so if you are a vegan and love brunch then you do not have many options available to you. Making brunch vegan is also tricky because you must be creative. Putting fruit on a plate and some granola on the side is technically vegan but it isn’t creative and over the years I have discovered that you can do many things to brunch to substitute non-vegan items. I have had some amazing dishes using substitutes like almond milk or tofu for bacon. When I heard that crudessence was offering brunch I felt it was a much needed addition to add to our not-so-long vegan brunch list. 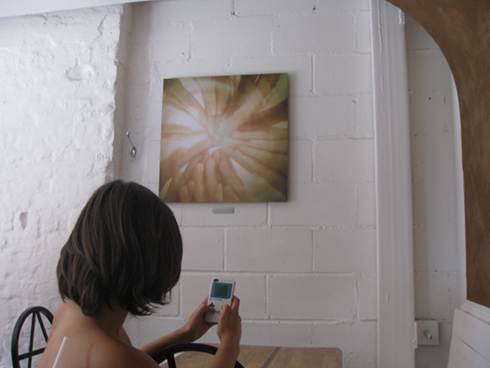 At 1st glance With locations on Rachel (105 Rue Rachel Ouest) and Mackay (2157 Rue Mackay), you have two places to chose on busy weekend mornings. The Mackay spot near Concordia University is larger but for the purpose of this review we went to the Rachel one. The interior of the Rachel location is very cozy with a seating area in one end with a capacity of around 10 people. The interior is light white and comfy. They have a curved wall in the back which gives a nice effect.

Food With a one page weekend brunch menu you have a few choices although, they did a good job of making them varied and vegan. The creativity in the dishes is impressive so that made me a happy camper. Prices are on average $9-$14 and they do not come included with coffee nor do they have free refills. The menu breakdown is as follows: 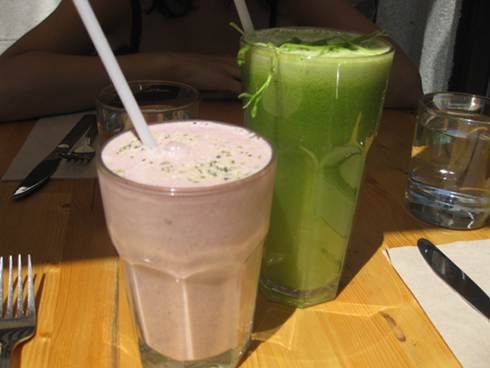 We all started with coffee and most of us had the café late with almond milk ($5). I like the fact that they were creative and use almond milk as opposed to soy beverage which everyone else does. I find that almond milk offers a unique taste and made for an enjoyable cup of coffee. (Sadly, there were no free refills). 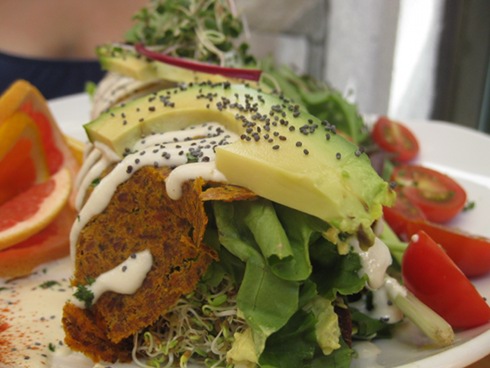 Our first dish was the burrito ($14) which was the best one on the menu. This was a very large item filled with dried tomato, eggplant, lettuce, and greens and a small side of fruit. The burrito was filling and tasty and the bread itself had a complex delicious taste which made this dish a winner. Since you can easily get full on this dish, it makes the price tag acceptable

The Chantilly crepe ($14) is an almond and cacao crepe with fruit in it and a vanilla Chantilly topping. The sauce was quite understated and the fruit was fresh. The dish was sweet but not overpowering and the portion size was fair. There was a decent amount fruit on the side as well which some places tend to cut back on.

The Fairmount ($11) is an apple and sunflower dehydrated bagel served with a faux “smoked salmon” pâté and a cashew “cream cheese”. The dish came with a bagel half and for and extra $3 you could get another bagel. I love how they made the bagel with such unconventional items. Its consistency is very different from a classic bagel. It was light and when you add the vegan smoked salmon and cream cheese it tastes surprisingly unbelievable. The only down side is that the dish is light so if you have a large appetite another item on the menu may be a better option.

On another trip a week later, I tried the Saint-Graal ($9) which is layered fresh fruit, granola and cashew yogourt. The cashew yogourt was very interesting since it’s an alternative for those who don’t eat dairy. It is rather similar to yogourt as the consistency is quite close; although, if I were to compare it to a vanilla yogourt there is a little taste that is missing. Don’t get me wrong, it’s really close but the taste of a vanilla yogourt has more depth that this cashew yogourt doesn’t have. Nonetheless, the dish is incredible with its fruits and granola and is an excellent dish to have, not to mention an incredibly creative one.

We had one waiter who did a decent job of checking up on us and we got lots of water refills even when we stayed there and chilled. They didn’t bring us bills so we just went to the counter and paid. We also didn’t get pressured to leave which is nice to have, especially when you aren’t looking for a fast food experience.

This place is vegetarian and vegan and all dishes are even gluten free. As a vegan or vegetarian who liked to have brunch, add this to your list.

I am very happy we have another vegan brunch option in this city. The food is tasty, the dishes use some creative ingredients and the taste delivers. Coffee is separate and does not have refills which is something I always enjoy. The price is fair considering you do pay a little more for vegan places and the preparation for these dishes is longer and more creative since doing a vegan brunch is not an easy task.

View Crudessence in a larger map