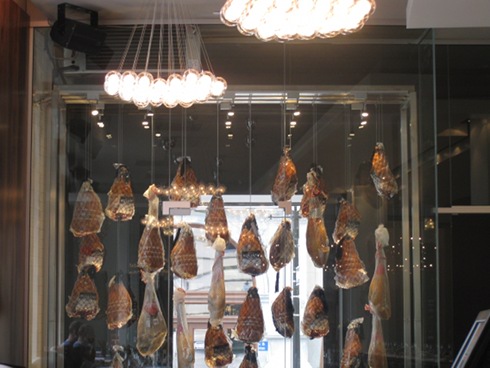 The 411 Ham, as a single word can evoke so much passion among food lovers. Growing up I fell in love with prosciutto – its complex flavour, salty nature and ecstasy-invoking abilities. Nothing made me happier than being somewhere where I can indulge and go hog wild on it. Over the years, my preferences have changed, evolved even, but deep down inside I still yearn for taking a perfectly sliced piece and wrapping it around my finger and popping it in my mouth. When I passed by Hambar and saw cured meat hanging in the entrance, I felt like I was in heaven. Then when I found out they offered brunch, curiosity and excitement inspired me to see what was going on. 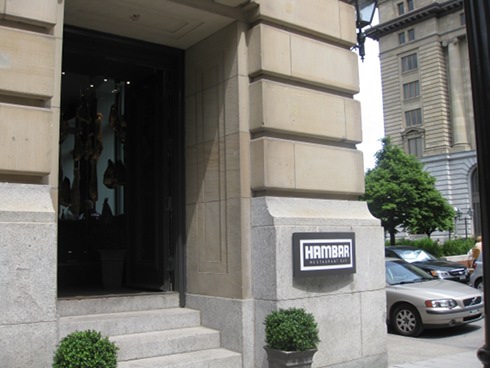 At 1st glance Hambar is situated in the Saint Paul Hotel right at the corner of McGill and Place D’Youville. In fact, if you have ever been to the old Vauvert, this took its place. You may have noticed this place before while walking in the area and peaked in the doorway you would see this glassed off room with ham hanging from the ceiling. The interior is impressive with a large bar on your left, 2 meat slicers in front of walls of pickled items and a well-lit and ample seating area with a long solid table in the middle. 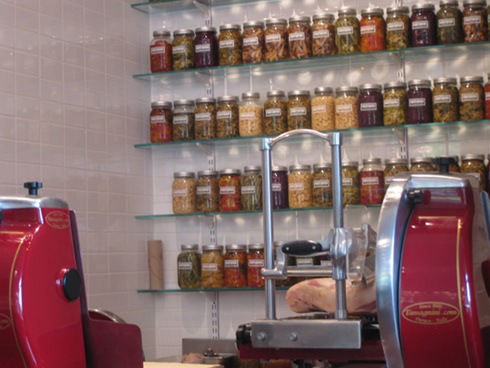 Food The menu can be divided into two sections, one would be the classic breakfast items like crepes, yogourt and French toast priced in the $11-$19 range; the other is the more substantial lunch items like lobster rolls, soft shell crab sandwich, rib steak etc, which are labeled “brunch”, and weigh in between $17-$44. The also have oysters and meat platters as well as the very rare pata negra also known as jamón ibérico, which is the caviar of cured ham, bred in southern Spain and raised on a diet of olives and acorns. This is not found in most restaurants and at $36 a plate, it is something you treat yourself to. The menu breakdown is as follows:

Although the above menu looks long keep in mind it doesn’t fit into the categories you are used to seeing. Please also note that there are no refills on coffee which is on average $4 a cup with no drip as an option but since it is a bit of a fancier place I didn’t expect drip. We kind of went crazy here because we were curious as to what there was on the menu and ordered more than both of us could handle. In fact, we were worried that since it was fancy place we would be hungry we found out halfway though that we were quite wrong. 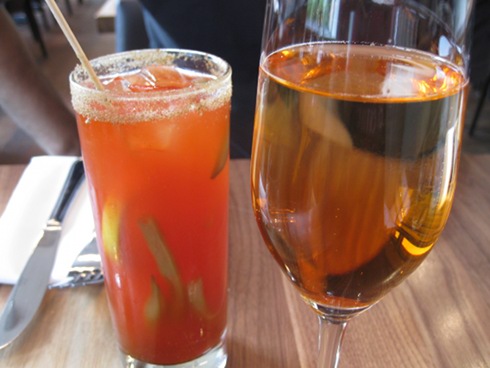 We started off with drinks, a bloody Cesar ($11) for my friend and I had the spritz ($12). The Cesar was average, nothing truly spectacular nor did the spritz tickle my fancy. I would have liked something a little more sweet or maybe even a mimosa, in hindsight, or probably stuck with coffee. We ordered flat water and got a bottle at $7. We didn’t make an issue with it but would have been happy with simple tap water.

Having gotten off to a rocky start, we ordered 4 items because we were worried the portion size would be small. We asked the waiter who implied that the portions of some of the dishes we ordered weren’t the most filling. In fact, he looked at my Crossfit training friend and suggested the Rib steak with Jerusalem artichoke but the $44 price tag kept us at bay and we weren’t really in a steak mood that early in the day. 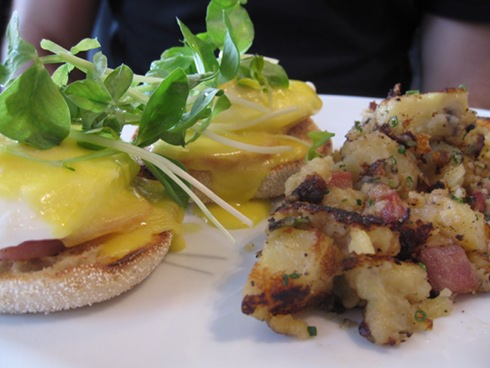 We started with the eggs Benedict ($15) which was two poached eggs on an English muffin, hollandaise sauce, ham inside and a side of potatoes. Immediately upon the first bite, the exquisite taste of the ham speaks to you and you are reminded why they call this place Hambar. They chose the perfect piece of ham to go with this. It was delicious and every bite was an absolute pleasure. The potatoes on the side were a nice bit that filled you up and the dish as a whole was filling and despite the fact that $15 for eggs benedict can be a little bit much, the taste was so good it made it worth it. 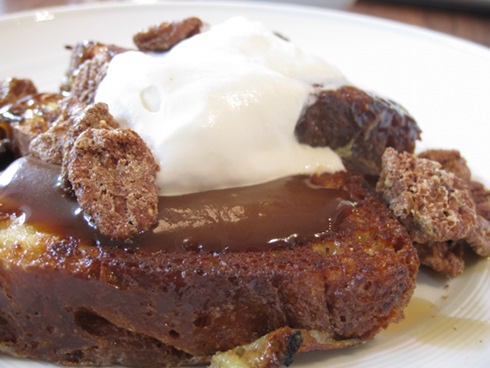 My main dish was the French toast ($13) which came with caramel and caramelized pecans. The slices were thick and there was a gentle sweetness that was perfectly distributed in every bite I took from the French toast. There was a cream topping it which can melt away if your turn your back on it and the caramelized pecans were light but such a wonderful touch adding a little extra something special in the dish. 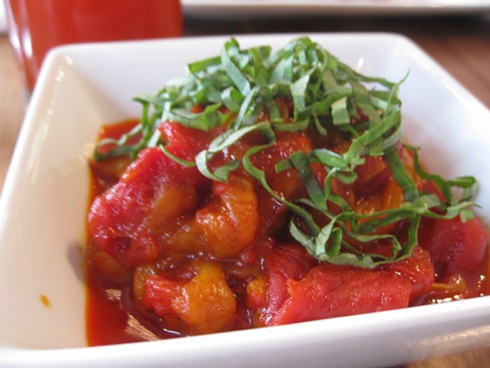 We also ordered a side of a Chakchouka ($8) which we felt was closer to an Italian pepper dish. We got a bowl with a side of bread and oil. The bread was refilled as needed for free and the peppers worked very well and were actually plentiful even though the plate did not look enormous. 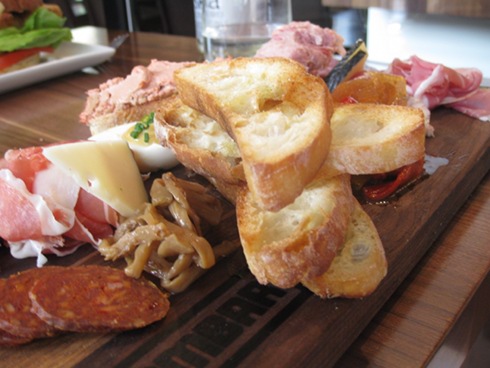 Next came the small platter of cold cuts ($24) which was anything but small. It had serrano ham, prosciutto, foie gras, a sausage with some patta negra in it, bread cheese and even more meat. I often don’t like these dishes on the menu but you do get a good sampling of what is to offer and the portion sizes were very generous. Even though we pigged out and shared this dish among two people, realistically it could be shared among larger groups as well. 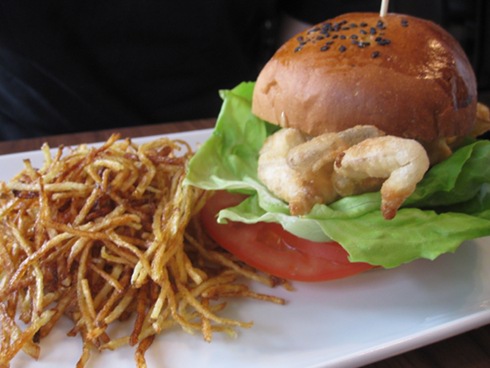 FINALLY, out came the soft shell crab club sandwich ($25). This dish was closer to a breakfast sandwich/burger than a club. The bread was perfect as it was soft, not mushy and didn’t melt away with the tomato. This bread also did not leave lots of crumbs which is the kind of bread I like. The fact that there is a whole soft shell crab is unbelievable; I have never seen this on a brunch menu which makes this very exciting. As a fan of soft shell crab, I was ecstatic at the least. The portion was very large and the crab itself eclipses the bread and was much larger than other soft shell crabs I have had at other places. I concede that the price is a tad prohibitive, although, if you ever want to get soft shell crab you will be paying in a similar price range since at the end of the day it is seafood.

I felt our waiter was trying to get us to order certain items based on their price and not what was good for us. He pushed the steak on us and told us other dishes would not be enough to fill my friend and we were more than full by the end. He also pushed champagne as a must have drink and maybe mimosas as a runner up. I was not a huge fan although the guy who brought us the bread was chill and told us we got refills on the bread.

Our bill came out to a lot because we ordered too much and had drinks. You can get away with minimal damage if you stick to a coffee and a main dish. It is a little pricier than most spots, but the area demands a higher price and if you have tried places in the area you will see the price is nothing out of the ordinary. I was truly impressed with the taste and portion size, both of which delivered that day. The price can easily get out of hand so if you are budget conscious do keep that in mind, but if you live by the words of lil Kim and “Money ain’t a thing, throw it out like rice” then go hog wild you will love it.

View Hambar in a larger map