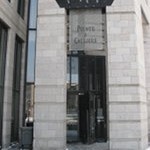 High up on top of the Pointe à Callière Museum overlooking the port, is L’arrivage. This impressive little restaurant offers an interesting and inspiring weekend brunch. With its polished look, ample service staff and a menu with great attention to detail, one would expect to break the bank when it comes time to pay. However, the prices aren’t that crazy (a little more than normal) but you will see by what we ate that it is quite impressive. Reservations are strongly recommended since we saw a lineup outside.

With a view overlooking the port, this is an ideal spot for a date or family/group event. We saw people in their 40s and over as well as some families with kids; not your usual plateau/downtown crowd. That doesn’t mean you can’t go because you’re young; as long as you bring your appetite you should be good to go. I was told that in the summer, they open up the doors and people can eat on the balcony. There is also an extra bonus of going to the museum after your brunch to make it an extra fun day. I can see this place being really great in the summer with locals and tourists although, I still see this as a hidden gem as it didn’t show up on my radar for quite some time. Oh yeah, did I mention that it is fully wheelchair accessible? This is a nice bonus ensuring that no one is excluded.

The menu has a bunch of items, some of which are more lunch than brunch but you can safely expect a good dozen brunch items with a twist. The menu is broken down into 2 sections: an à la carte section and a main menu with choice of entrée, a main dish and a dessert. Prices for the main menu will run you anywhere from $13-$19, while the à la carte is anywhere from $8-$16. The menu also includes coffee with free refills so when you add this up, the main menu can offer you some value especially considering some places downtown will charge 12$ for an eggs Benedict dish and $2 for coffee without an entrée or a dessert. The menu is as follows:

We were a couple people that day so we were able to sample some varied options. From the get go, the Gargantua ($16.50) caught my eye and nothing else on the menu could draw me away, even the fact that the à la carte did not have any included entrée or dessert (and I like a good value). The Gargantua is basically a sampling of their menu on your plate and although, the name suggest that it is gargantuan, I’ve seen larger. That being said, I have rarely had anything as tasty done under the banner of the “hungry man platter.” Usually these big dishes tend to be greasy and sloppy with just all quantity and very little quality. The dish consists of Eggs Benedict, French toast, yogourt, fruit, cheese, blood pudding crepe, and potatoes.

The French toast and eggs Benedict were excellent; they were 1 of each and scored full points in the taste department. In particular, the French toast was made of a different kind of bread. I was told it was a brioche bread although, it tasted closer to a croissant. Needless to say, I became an instant fan. The blood pudding crepe was quite unique and being a fan of blood pudding, I was quite pleased. The potatoes were OK; nothing amazing. The cheese was a nice touch and the yogourt was in a small glass container with fruit and crumble on top. The presentation was A-one and the taste matched it as well. The dish also came with coffee and refills. Putting this altogether, even with the price being a bit high, I was quite pleased.

My friends ordered the main dish which came with an entrée and dessert. Both went for the soup of the day which was endive with fennel. It was quite tasty and different considering endive soup is not something one is used to. I am generally not a huge fan of fennel but it worked because the taste wasn’t too pronounced. One friend started up with the blintzes and smoked salmon ($16) that also came with endives and was very tasty. Each bite popped in your mouth with bursts of deliciousness. There were other vegetables in the mix and the sauce on the side was a tasty touch.

My other friend had the eggs Benedict ($15.50) which came with ham (the gargantuan had a vegetarian one). The poached eggs were nicely done and the sauce was nice and thick. The potatoes were in a nice pot with some garnish and vegetables. The dish was enjoyable although, I preferred the Gargantua and the Blintzes. Finally, the dessert came around and although I did not have any included in my meal, my friends were nice enough to share it. The dessert was kind of funny. If you look at it, you will think it’s a middle finger or something else…wink, wink. It was a chocolaty mouse, a crumble top with fruit and ice cream. There was also this white thing in the middle that wasn’t marzipan but something I do not know. It was nice and quite the conversation piece.

Our initial waiter was “interesting” as he had a little bit of an attitude with my friends but, he seemed to like me. We later got a main waiter who was very good and checked up on us very frequently. I do have a bone to pick with one of the waiters who brought the coffee. While bringing the cups, he spilt some on the side of my friends cup and dirtied the outside. Now, I saw this and he didn’t know it. I would have preferred him to get a new clean cup. It’s not a big thing but the place has a certain air of professionalism and emphasis on service so I felt it needed to be mentioned. That being said, the rest of our service was excellent.

The menu has some vegetarian items so you are safe if you are a vegetarian. If you are a vegan or looking for one of those mega healthy fruit and cream cheese dishes, you are out of luck. The menu is carefully tailored and it is a little more lunch than a classic brunch.

I enjoyed this place and I think it is great for a date, or special occasion. I like the fact you can make reservations and I loved the view. The restaurant gets great light from its large windows. There is value to be had in the menu if you like the dishes mentioned above but don’t expect bacon and eggs dishes you would normally find in a diner; this is more refined and although , not for everyone, I think my readers will enjoy it. So, if you are in the mood to check it out, remember to make reservations.