One of the greatest challenges I come across while reviewing places is offering reviews on the vegetarian options, and in particular, the vegan options. Although personally I’m neither a vegetarian or vegan, I can see how difficult it can be to go out and find someplace to eat that offers something vegetarian/vegan on the menu. Things have come a long way in the last 30 plus years when you would have a hard time finding a menu item without meat in it. Many of the places I’ve gone too have some vegetarian menu items and they taste amazing. This is an easy thing to do when you deal with eggs, waffles, pancakes. Now vegan is another issue; it’s hard to find vegan items on a menu and often an item will be almost vegan if it was not for one small thing in it. I usually end up looking for fruit cups on the menu, which although are great and tasty, they aren’t really impressive. So all this to say, when we decided to go to Cagibi I was excited to find and review another place with not only vegetarian options but with vegan options as well (other than a fruit cup). So now that the stage is set lets take a closer look and see what we have on our plate.

As you pass by Cagibi you can’t miss the window with the little table and two really comfy looking arm chairs; its like a beacon welcoming you in, and once inside you see a nice eclectic mix of stuff with board games, books and plants on the south wall and the kitchen and bar in the middle. The kitchen is an open concept so you can see the staff working on your dishes. There’s also a lovely spice rack with big glass jars of tons of spices. All the menu items are on chalkboard and the Brunch item gets changed every day of the weekend. The breakfast items are handled separately and there’s also a back room with a an elevated area and a larger table. The place is pretty well lit and starts filling up after 12:00 (especially on Sunday) so don’t come in too late. 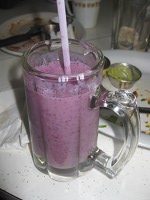 Their setup is done in such a way that there is one brunch item on the menu which changes every day of the weekend but there are six breakfast items which are served all weekend long. Three items on the menu: scrambled eggs and toast ($4.50), scrambled eggs toast, tomatoes and salad ($6.25) and the morning rumble ($6.25) are served until 11:00. The three other items: Granola ($4.50), tofu scramble ($6.75) and breakfast burrito ($6.75) are served all day long. All the items are either vegetarian or vegan and if you want to you can ask them to take a vegetarian dish and make it vegan, they either sub an item with a soy substitute or give more of the vegan items to replace for the non vegan ones when a soy product cannot be substituted. There is no extra charge for the substitution which is really nice.

We started off with drinks. I had the chai which was really good, and everyone else has an espresso and all came out to $2.75 which was pretty good especially considering the espresso was the size of a double. Although one criticism was that all the beverages are really hot, I mean there’s normal hot then there’s this. I personally like to have my beverage cool down a bit but this one took a while to cool down, but that’s personal preference -I know some people who microwave their coffee when its served to make it warmer, hey whatever floats your boat! I also had a smoothie and asked to make it vegan by subbing the dairy with soy beverage, I was worried that it would be too watery but was proven wrong since the taste was pronounced and the consistency was still thick. The smoothie was the same price as the other drinks as well and is a pretty good deal if you think about how much smoothies cost at other places.

Now enough with the liquids and onto the solid food. We ordered 2 items from the menu: the “heuvos scramble” and the “morning rumble.” I had the daily brunch special huevos scramble ($9.25) which came with scrambled eggs, peppers, onions, mushrooms, zucchini, guacamole, salsa, nachos and two types of potatoes (regular and sweet potatoes). It was very filling and the mixing of normal and sweet potatoes was brilliant since it really gave the dish that something extra, the dish was well spiced, and the guacamole and salsa chips actually work as a breakfast/brunch item. My friend ordered from the breakfast menu and had the morning rumble ($6.75) which is two scrambled eggs, chili, cheddar, mozzarella on a tortilla, served with salsa and yogourt and then pan fried slightly like an omelette almost. It was really fresh and every bite was bursting with taste, it only came with one piece of fruit which was somewhat disappointing since its always nice to get a little more fruit on the plate, but the inside of the menu item itself was jammed with food and was really tasty.

Service was really good and the staff is very friendly, you order at the cash and pay then they give you this playing card on a holder that you put on your table and when you food is ready they bring it to that table. I found this a fun and novel approach to being served. I was also told that when it gets really full they will take the orders at the table but when it isn’t you are best to order at the counter.

Now I finally get to use this section. To my knowledge this is one of 2 places in the city that offers a vegan breakfast/brunch option, there is a real need for more places like this or existing places to offer a vegan option other than a fruit cup. The menu if full vegetarian and with vegan options, if your item has non vegan food in it you can request to have it made vegan, there’s no extra cost to it. Now the kitchen is small and there is no segregated cooking area to promise no cross contamination, but to be honest I don’t know of any place in the city that can support this. So although its not 100% hardcore vegan it does an amazing job and more importantly it manages to pull off a vegan breakfast/brunch which requires some creativity considering that brunches tend to be dependent on eggs and dairy.

Cagibi impressed me with how it can pull off a vegetarian and vegan approach to brunch without compromising taste. I think other places can learn a lot from it. The decor is nice and I absolutely love the two sofas in the window that get soaked in warm sunlight. One the down side is that I would of liked more fruit on my plate, as well as regular coffee which they don’t offer, and the cash only policy is a little annoying but to be honest a trip here is under 10$ including tip so its not that bad.