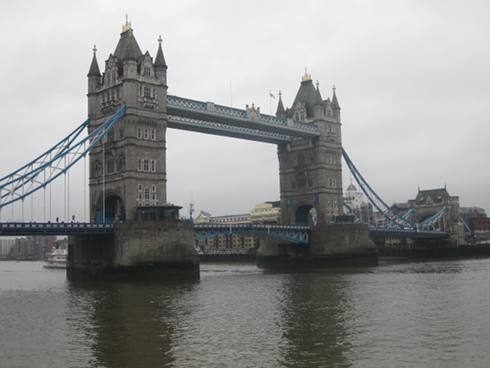 Recently, I went away on vacation to London and Paris. I saw some sights, caught up with friends and ate and drank my way to happiness. I guess you can say I channeled my inner Anthony Bourdain (aka my hero and the man whose job I want). One of my life goals is to eat breakfast and brunch from all around the world so this June I traveled to London and Paris but this write up will be about my brunch discoveries in London. I did not have as much time in London as I did in Paris so this will not be as long nor will I be assigning ratings to these spots. I would like to showcase two spots that I feel represent the London food scene very well.

Right off the bat I was lucky to have friends in London who were able to take me around and explain the complex identity of London. I mean, a city we often see as 100% white anglo-saxon it is actually incredibly rich in ethnic flavour and identity. In fact, my friends are Persians living in London and they took me to eat Indian food, to seesha lounges, to international food markets, and everything else a foodie can dream of. I will look at two places that best showcase this delicious ethnic duality: one is a Turkish brunch and another is a meaty English breakfast spot. 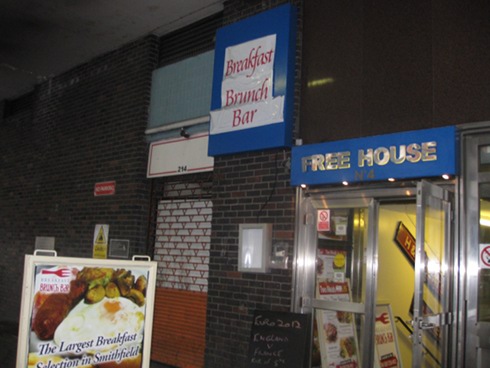 We have been lucky to have a couple places in Montreal that offer a British breakfast dish like Lawrence and Burgundy lion. Like any good traveler I do my research about what sites to see, how to get there, what I need to bring and where I must eat. It’s times like this when I turn to my hero and person whose life I want… Anthony Bourdain. Should any of you readers have any pull anywhere, I seriously want his job. No joke – he gets paid to eat, drink, and travel – all the things I love. Ok, so anyway, Anthony Bourdain went to this place called The Cock Tavern (4 London Central Markets The City, London EC1A 9LH) where he had the butcher’s breakfast which was a plate loaded with meat fresh from the Smithfield Meat Market. It’s very important to note that it took me forever to find this place, map and all. Once you find the Smithfield Market area, it is in of the short roads that cuts between it. There is not sign that says The Cock Tavern. There is, however, another sign that reads Breakfast Brunch Bar with stairs going down and then another sign that reads Free house on top of the entrance and the number 4. Now, it should be noted that no matter how lost you are, always refer to it by it’s full name because walking up to a stranger and saying you are looking for The Cock Tavern is different than asking for what you think the nickname of the place should be. 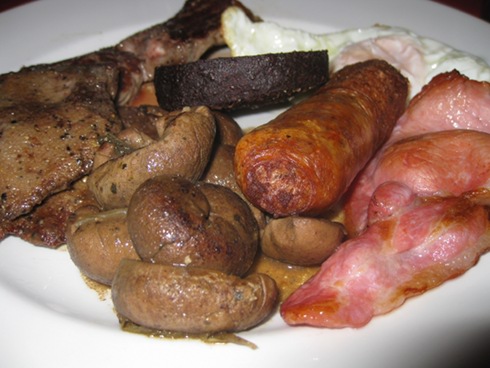 So, I finally found it and learnt a few things such as: show up early, the market closes early and I would have loved to see it but getting lost cut into my visit. As I descended into the The Cock Tavern I made my way to a large room with a counter bar that takes up most of the walls on the right and tables everywhere. This place is quite large although, I was one of the few people there at the time. I placed the order and prepared for the Butchers Breakfast which is 9.45 pounds or $15 Canadian Dollars based on today’s exchange rate. The butchers breakfast consists of rump steak, Cumberland sausage, bacon, liver, eggs, black pudding, kidneys, and coffee or tea. That plate was filing, as I am sure you can imagine – I mean they even had steak! The black pudding was quite tender; the steak was great and as a liver fan I was in heaven to get this on a breakfast dish. Generally, I am not the biggest meat lover but I was so happy and managed to finish every bite which I wondered if I would be able to. I think even the waiter had his doubts. The English breakfast here was everything it should be; it was meaty, fresh, tasty and filling and having done something deemed classic British with all that meat in my belly, I went onto my next destination. 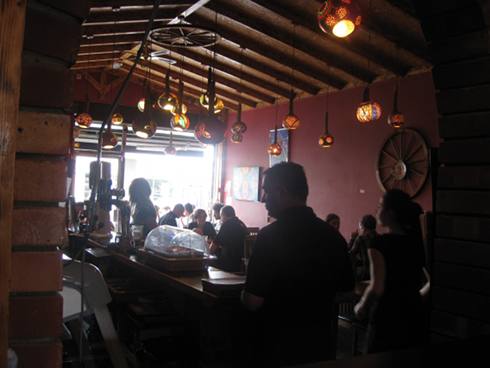 A friend of mine once said that the best food in London is the ethnic food and although I enjoyed everything in my short stay, I must say that the ethnic food is plentiful and unbelievably delicious. When my friend suggested we do a spot that offers a Turkish Brunch I was all for it. I had never tasted a Turkish Brunch and thought that having Persian Brunch and a Syrian one back in Montreal at places like Byblos, Kaza Maza and Rumi, I would be in for a similar experience. However, what I had was quite unique and undeniably delicious. 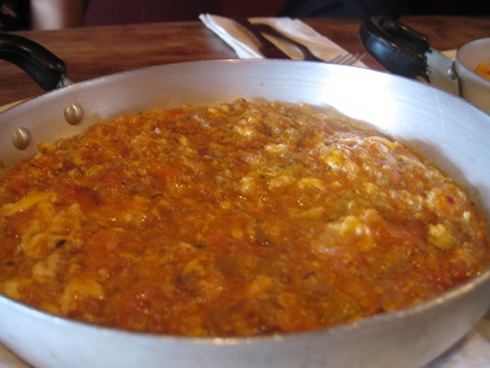 We ended up at Red Art Café 13 Kingsland High Street, Dalston, London E8 2PB. We ordered three Menemen which can best be described as scrambled eggs dishes with onions red peper, spices, and other ingredients depending what you chose. The prices for the Menemen that we ordered ranged from 4.50- 5.50 pounds which comes out to around $7-$9 Canadian. The three Menmen we had were quite plentiful and came with bread which they refilled for free. The best way to describe a Menemen Is similar to a shakshouka except with scrambled eggs. Since most of you might not know what a shakshouka is, then lets try this: imagine scrambled eggs with a tomato sauce, onions, peppers, spices and meat. It a somewhat more liquid scrambled eggs with a much more complex taste. We had one which was plain, another with Sujuk which is a Turkish Sausage and another with tomatoes and peppers. The Sujuk was my favourite since it had a spicy Turkish sausage meat worked into. All dishes were stellar and the flavour delivered in every bit and the portions were incredibly generous so much so that finishing those last few bites was a monumental feat.

So this wraps up my London food trip. I do plan to go back and check out a few more spots I heard of and try the ever elusive Indian Brunch. So keep on brunching and please share any info you have on Brunches from around the world.