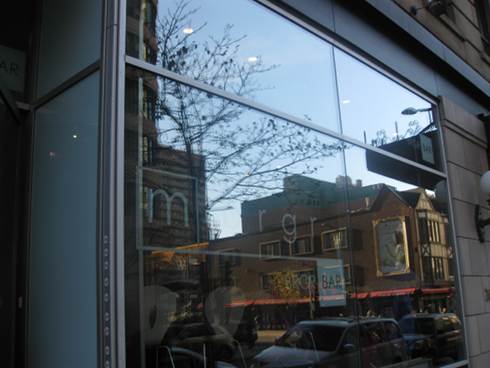 The 411 The breakfast sandwich is a growing trend that can be found on many brunch menus across Montreal. The concept of a breakfast sandwich or a breakfast burger adds a filling option to any brunch menu. In most cases, it’s a matter of hit or miss – meaning, it’s either mediocre or spectacular. So, you can imagine our excitement when we heard that Mbrgr Burger Bar started offering brunch. If you are familiar with Mbrgr, it’s a higher end burger restaurant over on Drummond Street. I’ve been here a few times over the last few years and enjoyed the burgers.

M:brgr is a nice addition to the downtown core brunch scene, which is kind of lacking, if you consider how many people pass through it and the amount of places to eat. Capacity here is quite good, so you can rest assured you will get a spot. The interior is nice with a well-lit area near the front and a larger back area near the bar.

Food The menu is a one pager with 10 brunch items and the rest is from their lunch / dinner menu. Coffee is $3 and comes with free refills with prices ranging between $10-$15 . The menu has a good amount of breakfast sandwich/burgers and a few other traditional breakfast items like French toast or scrambled eggs. The menu breakdown is as follows:

It’s safe to say we all wanted to see how their breakfast sandwich/breakfast burgers stood out. I mean Mbrgr is know for burgers and in some cases really fancy ones, so we decided to focus on what made them famous. 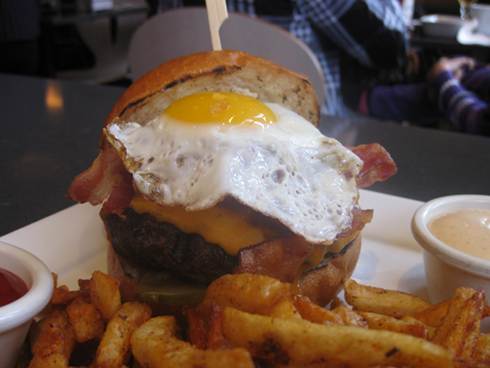 We started with the brunch burger ($18.75) which is: AAA beef, cheddar, bacon, a fried egg, chipotle mayonnaise, tomatoes, pickles and a side of fries. The burger is quite large and filling, the bread is excellent in that is doesn’t disintegrate no matter how many sauces you put in your burger. I should note that the price is quite high for a breakfast burger compared to most other places offering this but do keep in mind that this is more than a normal burger and the only thing that makes it breakfasty is the egg, which is an option I have taken when I built my own burgers. I give it points for taste and the fact you get a large portion; although, I felt creativity could have been improved by working in an omelette layer or using a breakfast sausage patty. 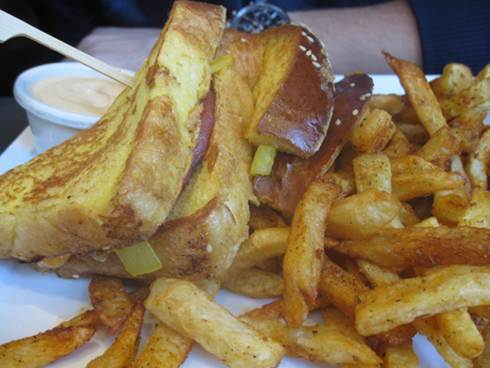 The Monte Cristo Sandwich ($10.99) is Monterey jack cheese, salami, mustard, sautéed onions, and a side of fries. The bread used was a kind of challah bread and done in almost French toast style but not as greasy. The Salami is a very interesting addition and the dish as a whole works rather well. The price point is quite fair considering you also get a large portion of fries with it. 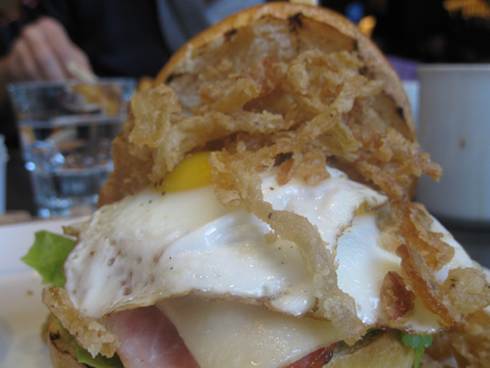 My dish was the Adad’s breakfast sandwich ($9.99) which is two sunny side up eggs, Monterey jack cheese, roasted ham lettuce, tomato, French fried onions, basil and mayo. The dish was tasty and was inhaled in record time. I would have liked to have sides like the other two dishes since I was a little hungry after. The taste of the dish was good. My socks were not knocked off but I was not disappointed in the taste. 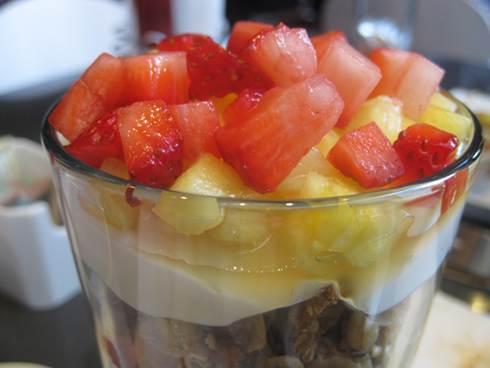 Still curious for more I decided to add another dish and tried the granola parfait ($9.99). This dish had fruit, greek yogourt and honey. The dish was served in a tall glass. The presentation was impressive and the taste was quite good; although, the honey was not present in the taste and I was kind of hoping to get some of that taste out of the dish, but I was satisfied.

Since our resident drink expert Jay Pendergast III was present he sampled the bloody Caesar and has a few things to say about it:

Not much to say about MBGR’s bloody offering. It’s solid but not exactly mind blowing. The rim is encrusted with crushed up Montreal steak spice, cracked pepper, and sea salt while the beverage itself contains fresh horseradish. Seeing our city’s namesake meat seasoning on the edge of glassware is nothing new, and if you want to get the full effect of it I suggest you have it elsewhere. Horseradish is often seen in Bloody Mary’s and definitely did wonders to add complexity to that drink’s flavour, but here it seemed lost. I think a spicier, pickled, jarred horseradish would have had better effect. MBGR is known for their burgers, and rightfully so (have a Big Zac and you’ll see why), but it’ll be a long while before they’re known for Bloody Caesars. 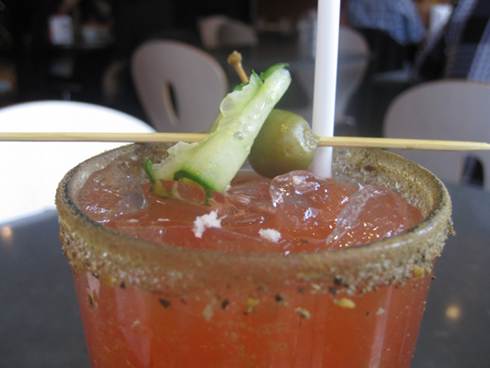 I’d like to take a moment to address my tendency to be harsh in my reviews. Most Bloody Cesar’s you’ll encounter in Montreal will always range from mediocre to decent. I have yet to be blown away by a Caesar. Bloody Mary’s are a different story. Travel to Brooklyn, the Mecca of this drink, and you’ll experience exactly what I’m talking about. I want to liken the experience to taking heroin, but it’s very different in that heroin users spend their whole lives trying to recreate the first high they felt that first time they shot up, while a Brooklyn Bloody Mary will repeatedly blow you away and induce taste-bud euphoria. Montreal’s Bloody Caesar’s serve as a sort of methadone until I can next visit my New York dealers. Week after week we’ll talk, critique, and judge the Bloody Caesar’s imbibed in this city’s brunch joints, but I’ll guarantee you this: the ultimate victor in this contest will be a Bloody Mary.

Our waiter did a good job on explaining the dishes. However, I did have to ask for my coffee to be refilled 3 times. On a few occasions my cup was fully empty almost and no one came to volunteer a refill. I did feel they may have been short staffed but, I really like my coffee refills.

One would assume that with it being a burger place there would not be any vegetarian options, but that is wrong. There are more than 50% of the menu items present without any meat and there is even a fully vegetarian veggie patty which is a nice thing to see.

There are some things on the menu I like such as the Monte Cristo and it’s price. I enjoyed the brunch sandwich but I did find the price was high at $18.75 and when you consider that coffee is $3 extra you can see your bill climb. Don’t get me wrong, I welcome a new tasty brunch option in the downtown core and I like that they have a bunch of breakfast sandwiches/burgers. I suspect the menu may change over time and we can see some new creations.

View m:brgr in a larger map