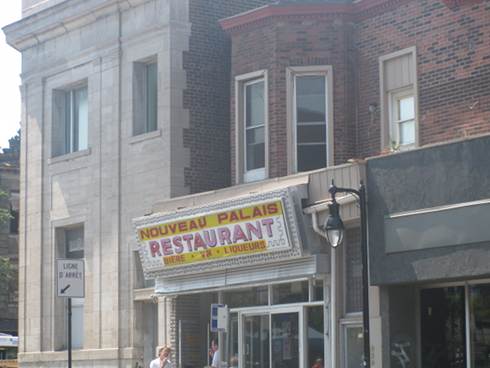 The 411 Bernard street used to be my favourite spot when I began doing reviews; you had an impressive concentration of places that served up brunch mainly west of Parc street. I used to love it but fell out of love over the last few years as I started seeing other streets and neighbourhoods. However, recently I heard some buzz circling back in the Mile End and have made my way back and to be honest the street looks good with some new spots and Nouveau Palais is one of them.

At 1st glance When you pass by Nouveau Palais you will think it’s an old casse-croûte. The exterior looks old and so does the interior, kind of like a typical Montreal greasy spoon but the team inside is all new and has been making a name for themselves by filling people’s stomachs and making them very happy in the process. We went as a group and granted it was the weekend of Osheaga so people inside looked like they were in a Vice photo shoot (that means it was hipsterific). Keep in mind that clientele, like fashion, changes but good food keeps people coming back no matter how skinny your jeans are (ok 2 hipster jokes per review is my max). 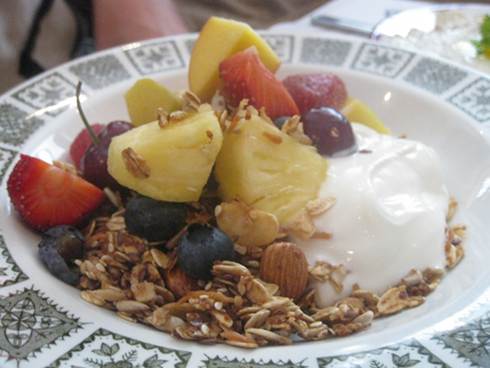 Food The menu is a short 1 pager, that covers your mains, sides and drinks. Coffee is priced at $1.50 and comes with free refills and main dishes range from $4.65 to $13.50. They don’t accept credit cards so bring cash. The menu, although short, gives you an egg dish, pancake, waffles, omelettes and some specials which are off menu. The menu breakdown is as follows: 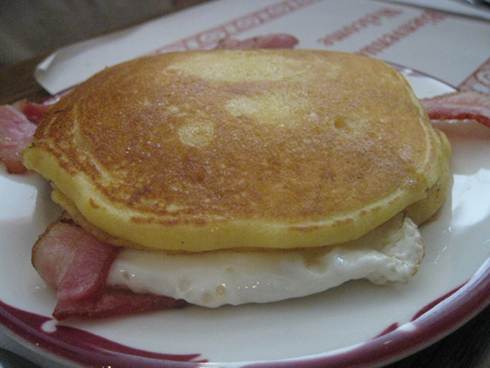 Although we were a large group, everyone kind of gravitated to the breakfast sandwich ($7.95) which is not exactly a classic definition of a breakfast sandwich. In fact, it’s two pancakes that act as the bread with a fried egg and bacon inside. To be honest, I have never seen this before; it combines two classic breakfast dishes and puts them together with a bacon sticking out on the sides. This dish was fun, well priced and actually filling even though it doesn’t look enormous. It’s a treat to find a creation like this which is a combination of classic items and yet still something new and unique without falling into an overly fancy deconstruction of breakfast. 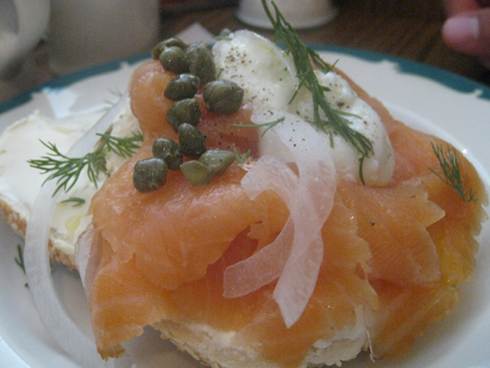 We also ordered one of the specials of the day which was a poached egg on a bagel ($13.95) accompanied by cream cheese, smoked salmon and capers. This dish is a classic mix of all things Montreal. I mean you get your Montreal bagel, cream cheese, smoked salmon and topped with a poached egg. Once again, I thought this was a rather unique marriage of classic breakfast items. This dish is filling and tasty as the bagel and smoked salmon combo will fill you up and the poached egg helps finish up if anyone is extra hungry. 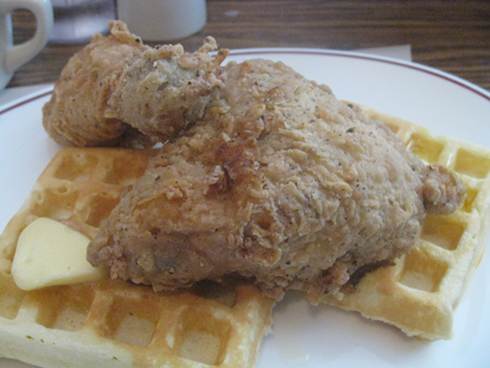 My order was special and chose the fried chicken and waffles ($13.50). I know what your thinking… who eats fried chicken in the morning? Well, I did this morning ONLY because it is something you don’t see all the time but the places that are brave enough to do it always put out a tasty dish. Now, I doubt that 10% of people will chose this on the menu but if you are hungry you get two large and filling pieces of fried chicken and two fluffy waffles. I felt the waffles were a tad small but the chicken portion was incredibly generous and that’s what will fill you up.

Service was inconsistent at some points – they were really quick refilling coffee and answering questions and other times we waited a while to flag someone down.

Half of the menu is vegetarian friendly and although it is a short menu you won’t feel like you only have one option and it’s varied.

I liked Nouveau Palais. It has a definite classic breakfast style with some creative spins that still honour the breakfast tradition. I am a huge fan of the breakfast sandwich which I felt was absolute genius and a must have should you go.