As you pass by you will notice it by the two large windows and the fruit, coffee and toast pictures painted at the bottom of the window. Come on the weekends and you are more than likely to see a small lineup (15-20 mins approx). The inside has simple decor and there used to be church pews as seats although I did not see them last time I went but I was assured that they are still there.

The menu has some well priced options with everything pretty much under 10$. There is a fair offering of omelettes and classic egg dishes. Although the true standout is the “Place Milton” special; it is rather filling and really well priced. Basically, for around 8 dollars you get 2 eggs sausage, ham, bacon, potatoes and 2 pancakes. The plate is filling for for the price you can’t go wrong, although the pancakes were not amazing in the taste department, don’t get me wrong they were not bad – they just did not stand out. I also had the french toast but it was not that thick and filling. The potatoes were ok but they used to be better and they used to give you more years ago. I really suggest sticking with the Place Milton – I’ve come here over a dozen times and every time I order something other than the Place Milton and I regret it.

Service is always good – you get free refills, and they come often. The lineup is not too long and the atmosphere is not pretentious

The omellettes offer some vegetarian choice and if you ask them to hold the meat on some of the plates your ok. I did not see any vegan options on the menu though.

There’s nothing fancy about place Milton, nor does it try to give off that image. It is classic with good sized portions – all for a fair price. Now even though over the years the decor has changed; the potatoes are not the same and seem to have a smaller offering. The pates look modern and square. But in all, Place Milton still has that charm that makes it the big man on campus. At its core, it’s your classic breakfast on a student budget. While there may be better places in the area, that does not mean that you should pass up on it. 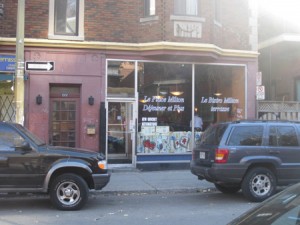 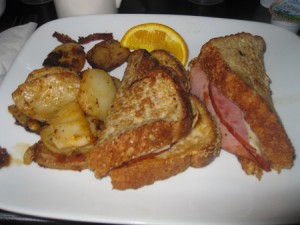 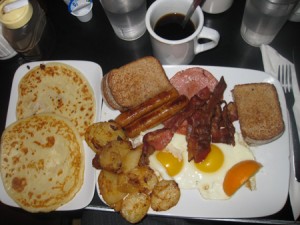