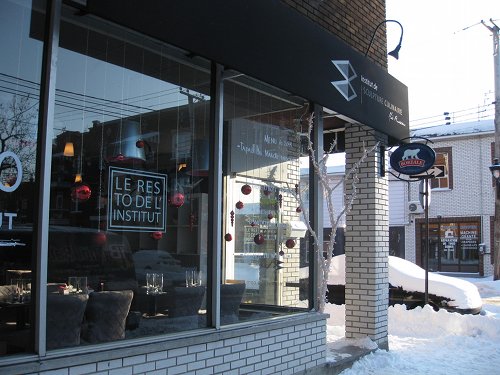 The 411 – For those of you who have been following my reviews, you may know that the Villeray area has been expanding on their brunch selections. I have recently posted a few of the more recent additions to the area. L’institut de sculpture culinaire is a school for fruit carving and presentations. By carving I don’t mean carving a thanksgiving turkey, I mean carving fruits and vegetables; you know those large displays at special events made of fruit? Well this school will teach you that. Besides teaching, they recently opened a restaurant that started to offer a weekend brunch.

This little corner spot on de Castelnau and Drolet holds around 40 people maximum and reservations are suggested, especially if you plan on being a group. Every time I have gone it has either been full or had a small lineup. I also see groups for birthdays, anniversaries and special events. The interior is nice and there is large window on the north side that offers lots of light. They layout some tables there and a bunch of more tables running north/south near the washroom and chalkboard menu on the side.

On average most items are in the $10-$14 range with some items being more and others less but your bill should come somewhere around there. Each dish comes with fruit, potatoes, toast and coffee as per the web site although our bills had coffee separate at $2 with free refills. I should note the site could have changed since my review as many restaurants will tweak menu items over time. Their menu has most of your favourite items on it with a few twists like Rosti’s which you do not find in most places. This little twist is quite nice and some items are made with Taro which I have never seen before on a menu. The menu breakdown goes a little something like this:

We were a rather large group and tried to order a couple different things so I got a chance to understand most of the dishes. To begin with, there were the Rösti’s with a choice of vegetarian and smoked salmon both of which include a poached egg, béarnaise sauce, and Taro. For those who do not know béarnaise sauce, it is a bit different than hollandaise sauce. It is considered lighter and is made up of clarified butter, egg yolk and herbs. Taro is also something you will not find often and it’s a kind of root that is prominently featured in the Rösti and is traditionally potato based. The first of the two Rösti options is the vegetarian ($12) which has a poached egg on a Taro, emmenthal cheese,

mushrooms, tomatoes and béarnaise sauce. The dish was very light and tasty, the cheese was not too pronounced, and the sides were fair. The smoked pacific Rösti ($14) which was similar to the vegetarian, had smoked salmon and cream cheese with seasonal vegetables. The taste of the pacific salmon was more pronounced than the vegetarian and not as light. Both were still filling.

There was also the Convivial (sharing plate), which is $15 a person and for two people. It comes with cold meats, cheese, a breadbasket, jam, fruit, rice, two eggs and beans. The dish is quite large which is good since it’s a sharing dish and the fruit portion of it is quite enormous and varied. The dish also has a nice selection of soft cheese and cold cuts such as prosciutto which, although would not normally be considered as a brunch item, works rather well in this dish. The saltyness of the prosciutto pairs nicely with the cheese and fruit. Also, the egg on a bed of rice is an interesting touch. I did not find that rice was the best paring option and I would have liked to see maybe another carb like a mini waffle/pancake;something a little more breakfasty.

Of course, no review is complete without our resident potato expert Batata and here is his take on the potatoes at L’institut: Fantastic red potatoes so beautifully oven roasted but very lightly seasoned. For this case, I believe that the chef knew exactly what he was doing by salting it ever so lightly in order to bring out the organic sweetness of the potato. I am not much of a salt fan so it was just right for me. Others might want to reach for the salt shaker. Truly a fantastic side dish to all potato lovers. Need to ask for it as a side since it isn’t explicitly stated on the menu. I would have loved more for the price I was paying but that is due to them being so tasty and not so much for the quantity. A must have if you visit.

The service was excellent as our waitress went above and beyond the call of duty to explain the dishes. Our coffee refills were also rather frequent and the staff was very warm and laid back, even chatting with us at the end of dinner.

There are some vegetarian options here, not only the vegetarian Rösti. In fact, the majority of dishes do not have meat as a pivotal point of the dish so as a vegetarian you are lucky. Vegans can chose from a generous array of fruit but dairy accompanies most of these. I did not spot anything gluten free although did not ask explicitly. Maybe calling ahead will help.

I was very impressed with Restaurant L’institut. The menu was varied and our dishes were tasty and filling,not to mention a break from the norm. The Rösti is a really nice touch and I love how they brought that from a dish you rarely find to a pivotal dish in their menu. I also love how they got creative and used Taro. The coffee is not included and some dishes can get into the $14-$15 range so keep that in mind. The sharing plate is good but somewhat light so if you are looking for a more hearty meal this would not be the one to chose. I should note that the fruit displays are beautiful. We didn’t get one at our table but the other table that was having a special event did have it so if you want a special event, you should call and ask them for it.