The Paramount - MONTREAL Brunch and Breakfast 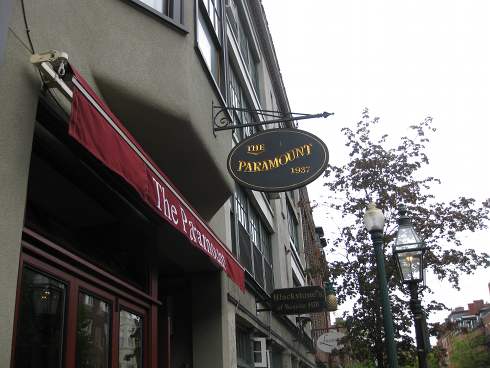 The 411 On a recent trip to Boston we went out searching for some brunch spots. One spot was a suggestion from a friend who said we needed to check out Paramount. Apparently, this institution has been serving up morning delights since 1937 – yes, that’s right, 1937. In my books, we call that an institution. What makes Paramount interesting besides the food and it’s history is that they have a system that they advertise quite well where you wait in line and by the time you get to place your order and get your food your spot is available to you to sit down. Even if you are a group of 10, like we were, they make it happen. In fact, their sign even says not to save any spots and that it has been working well since 1937. No joke, we got our table along with everyone else. The only downside to this is that the line up moved slowly and we ended up waiting for 45 minutes but we did get to see our food being made as we waited. 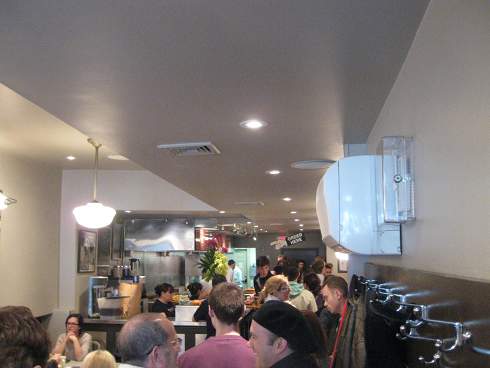 At 1st glance When you get to Paramount you notice a lineup outside which snakes inside all the way to the back then loops along the front and stops at the front, which is kind of the halfway mark. Fortunately, the washrooms are at the halfway mark so by the time you get halfway, you can easily sneak in for a washroom break while you wait. The place itself is long like a bowling alley and their capacity is close to 75 people but the line can get to be an hour long. They have lots of pictures and memorabilia and the menu is hanging on top of the kitchen area so while you are in line you have more than enough time to chose what you want. 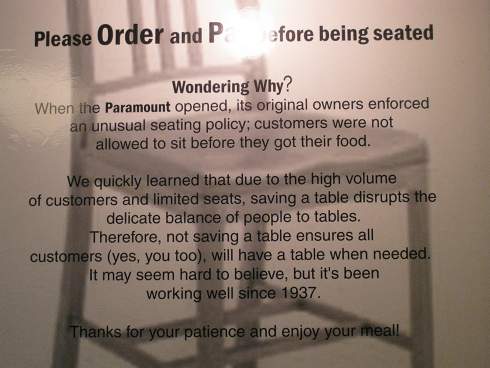 Food The menu is a classic breakfast list with a few little extras that are priced under the $10 range which is amazing. You get all your classic dishes like eggs, pancakes, French toast, waffles and omelettes. Although, there are no eggs Benedict options but you can get some egg sandwiches which are not overly traditional per se but may hit that eggs Benedict craving. That being said, you can kind of imagine what the menu looks like and for more details here is a breakdown: 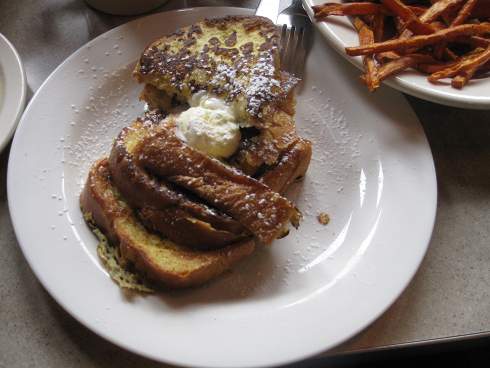 With a group of 10 people we got a decent sampling of what Paramount has to offer. Let’s start with my friend who had a Texas style French toast ($6). With a name like Texas-style, one would certainly be curious. The dish was French toast straight up with very large thick slices. It wasn’t a challah bread but likely a whole loaf bread and not like that pre sliced stuff you get at the grocery store. The eggs coating was great it was perfectly soaked. The taste was conistently delicious in every bite. This was a perfect French toast. 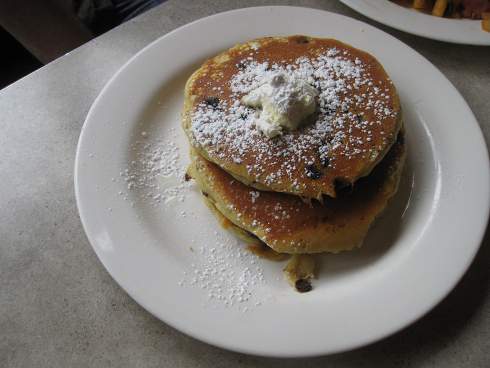 The blueberry pancakes ($8.50) was a generous stack of pancakes topped with sugar. The pancakes had an excellent consistency being just a touch fluffy while still having a little firmness so as to not end up in the mushy state on the plate. The blueberries added a nice little extra to the dish making it fun and tasty. The sugar topping was not really necessary since the dish stood on its own and did not need that extra sweetness. 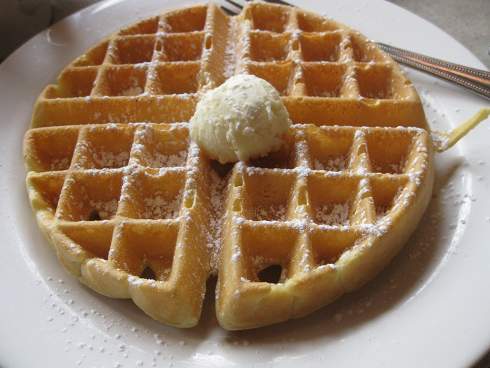 The waffles ($6) came as a simple waffle where you could add margarine to it or maple syrup. Although being a simple waffle, the taste and consistency were anything but simple. The waffles were perfectly golden and a little crispy on the outside with the right touch of fluffy on the inside. It was moist, and delicious. I do wish it came topped with fruit or a fruit dish on the side but to be honest at $6 it’s a pretty good deal. 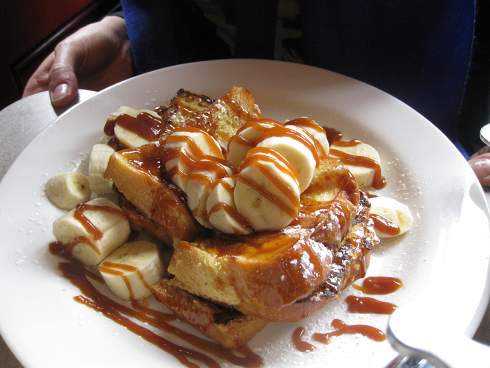 One of my favourite dishes was the fresh caramel and banana French toast ($7.50). This dish comes with thick French toast slices topped with bananas and drizzled with caramel. The caramel works so well with the bananas and French toast especially since it is not too sweet and overpowering. I was most impressed with this dish since the taste was unbelievable. This was the true star on the menu. 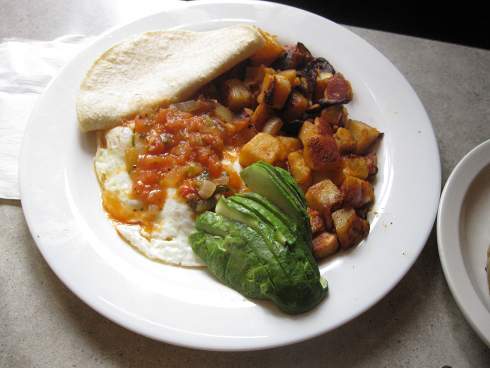 Other dishes we ordered were Huevos Rancheros ($9.00) and the Spanish omelette $8.50. I did not get a chance to sample them but our potato expert batata was on site and weighed in with his potato expertise on those lovely sides to help fill you up in the morning:

“Hand-cut diced desiree (red potatoes) potatoes with skin mixed in with some irregularly hand diced, caramelized onions. They were lightly oven roasted which left them juicy and very pleasant for the palette. The portion (almost 50% of the plate) was fantastic. Nothing extraordinary but pleasant with the overall turnout. Good quality ingredients and great compliment to the omelette since they did not over-power the ingredients and flavours of the omelette.”

Service was limited to our coffee refills and our order was taken at the cash. I will comment on their unique seating system which I initially felt was a touch odd but considering we were all seated and got our meals at the end, it sort of works out well that way. That being said, the lineup is long and for good reason but you need to budget at least 45 minutes from one end of the line to your seat. I also like the fact that they are so adamant about it, it reminds me of those spots that have been around for ages on account of quality food and have a weird in-your-face policy. I find these are funny and nice to see once and a while.

Every item we had did not have any meat in them. In fact, from how I read the menu, you will likely have to order it as a side. There are no real vegan options here since eggs is an item featured in every one of the dishes.

Paramount is legendary; any place that has been open since the 1930’s and can still draw a lineup is doing something right. The prices are cheap, which is nice to see and they have all your classic dishes and they do them well. They also have some nice touches like the caramel French toast and the Texas style one. The lineup is the only thing you should keep in mind so either get there early or bring a whole lot of patience.

View The Paramount in a larger map